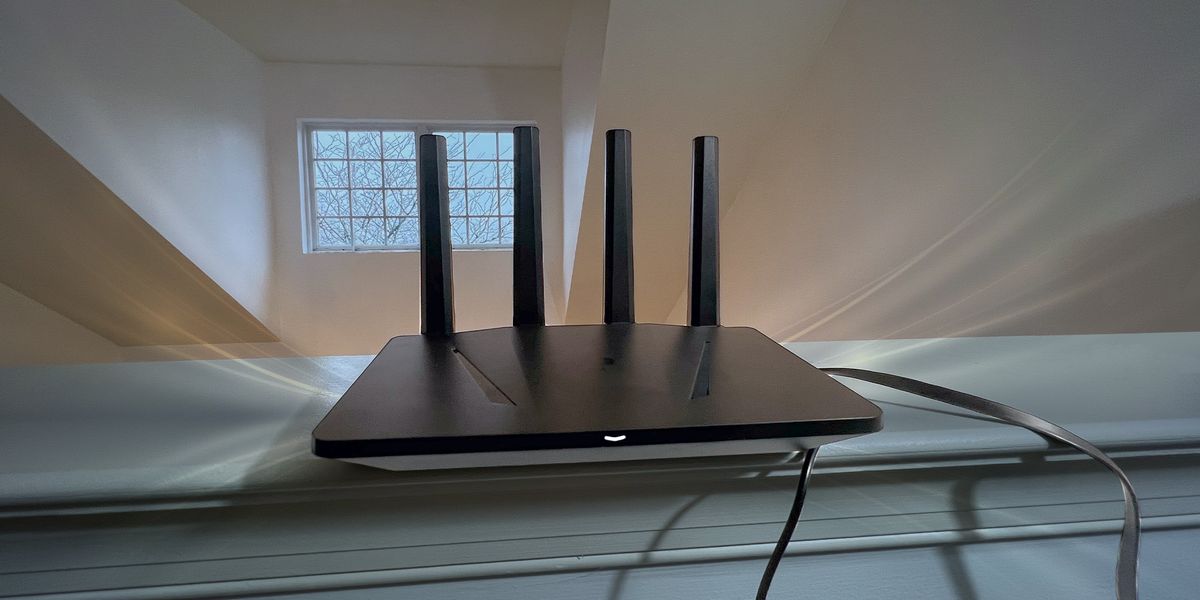 Internet-connected gadgets like smart speakers and tablets continue to dominate as some of the hottest holiday gifts, so chances are that you’ve amassed a small collection of devices which constantly log your online activities. But, while they’re helpful around the house, they can be a liability if external parties remotely access this sensitive web data like account passwords and security camera clips for nefarious purposes. While the thought of a hacker breaching your privacy is enough to make your head spin, even your friendly neighborhood Internet Service Provider (ISP) can use your online information against you. If an ISP decides your downloads or torrents have used up too much bandwidth, it will often throttle (reduce) your internet connection speeds.

A Virtual Private Network (VPN) can help shield that sensitive data and the websites you visit by creating a secure connection to mask your devices’ identifiers (such as an IP address) and encrypt their network traffic from all prying eyes. Typically, you need to download a VPN app or “client” directly to the device you want to use the service with. This is usually limited to a laptop or smartphone running an operating system that can support software, not Internet of Things gadgets like your smart TV, cameras, or gaming systems. But a new router, the ExpressVPN AirCove changes that by integrating a VPN directly into its hardware to automatically cover all devices that connect to its network—even gadgets that can’t install a VPN client. While its speeds could use a shot in the arm, its stable performance and ease of use is unrivaled. 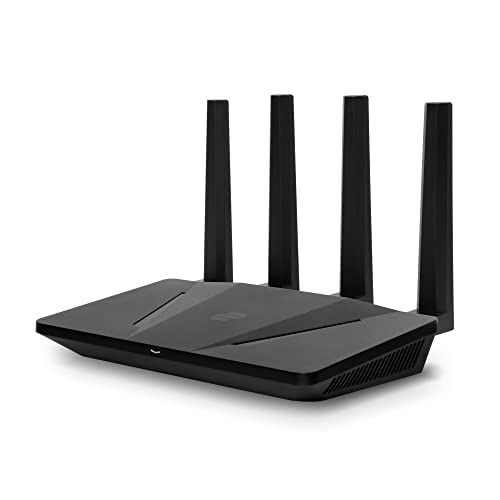 In addition to being our resident tech expert, I’ve spent two decades surfing the web and downloading huge amounts of content. I’ve used various VPN services to set my PC’s location to different regions to get discounts on products, access video game servers around the world, and watch the programming on other countries’ streaming services (UK Netflix is often better)—a VPN runs virtually on remote servers all over the world, so you can make it look like you’re accessing the web from a different state or country.

After vulnerabilities were exposed in Eufy’s home security systems (the brand I use for my smart home) late last year, I realized two things: No company can be trusted to fully protect your data, and my cybersecurity setup needed a refresher. This drove me to try out ExpressVPN’s Aircove because its entire premise is to easily add an extra layer of protection to all of my gadgets without the hassle of installing software on each individual device. Plus, this a Wi-Fi 6 router for fast and stable connectivity even when crowded with dozens of devices. This translates to better overall performance from each device with fewer drops in connectivity and speeds. Throughout my two week testing period I loaded the router up with 31 devices ranging from smart home cameras to game systems.

The all-black Aircove is a thin router, about the size of two cable TV remotes placed side-by-side. It has four antennas that are plenty sturdy to stay pinned in the direction you tune them, with enough range to cover up to 1,600 square feet. To set up the Aircove, simply connect it to your modem, and then connect your phone or computer to its Wi-Fi network from your phone or computer (you’ll have to install a firmware update). It has four LAN ports on the back to hardwire your ethernet devices, but I only used two: one to the modem and another to a gaming PC. The hardest part of the install is entering an ExpressVPN activation code—to access the VPN features, you need a subscription, which breaks down to just over $8 a month when you sign up for an annual subscription. 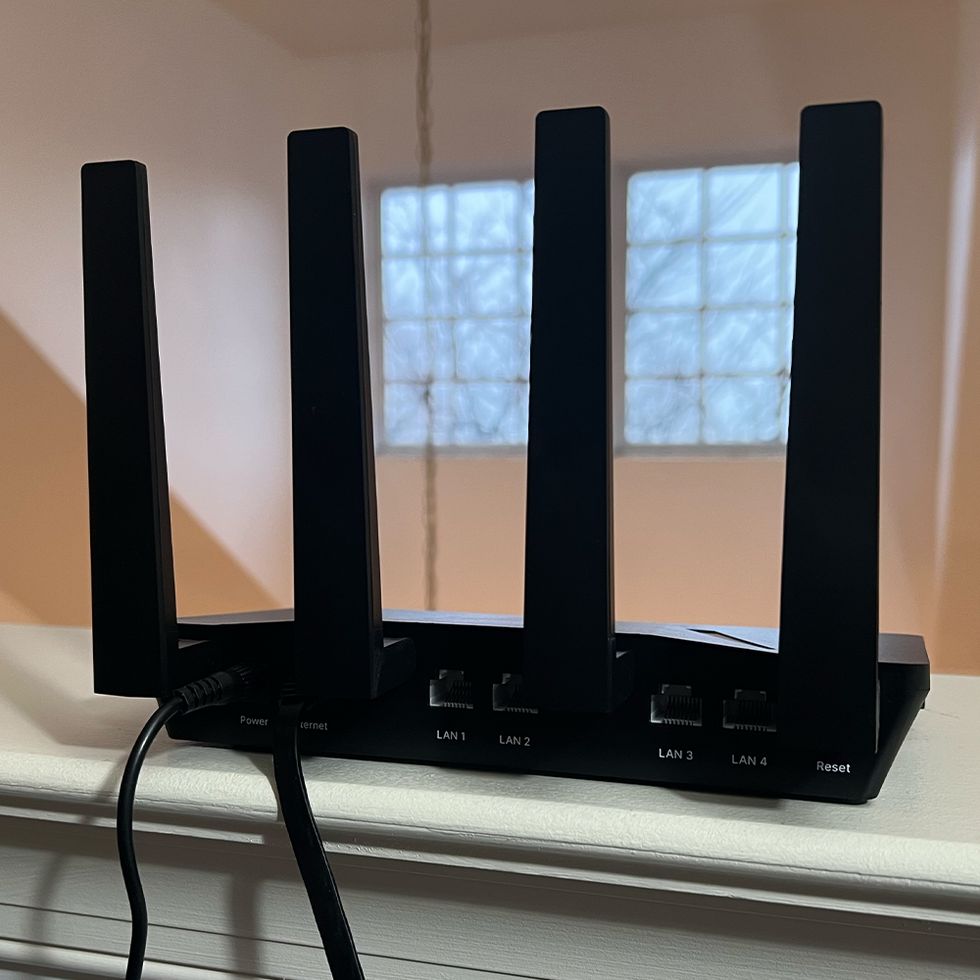 Once up and running, the Aircove router automatically masks and protects any device that connects to its network, and it can be easily managed with a web-app dashboard, which has a familiar interface whether you access it from a phone or computer. The main page shows a list of connected devices and lets you create groupings with specific rule sets like making them appear from a different location. You can easily drag and drop devices from one group to another: By default all of my devices use a United States VPN, but when I want to access foreign content I drag them to a group I named “UK.” This automatically switches the device to a UK server without any inputs other than the simple drag motion. You can have up to five simultaneous device locations active at the same time.

I validated that the devices connected to their assigned regions by using the website What Is My IP Address to show the IP address and location while also checking for any DNS leaks. There were no lapses in coverage, and this level of security virtually ensures that you’re a ghost to all other parties. My fiancée is not tech savvy and couldn’t care less about the security, but appreciated that the VPN’s location spoofing worked flawlessly—she was able to watch UK episodes of Love Island on ITV before they premiered stateside from our smart TV without opening an app to activate VPN service. 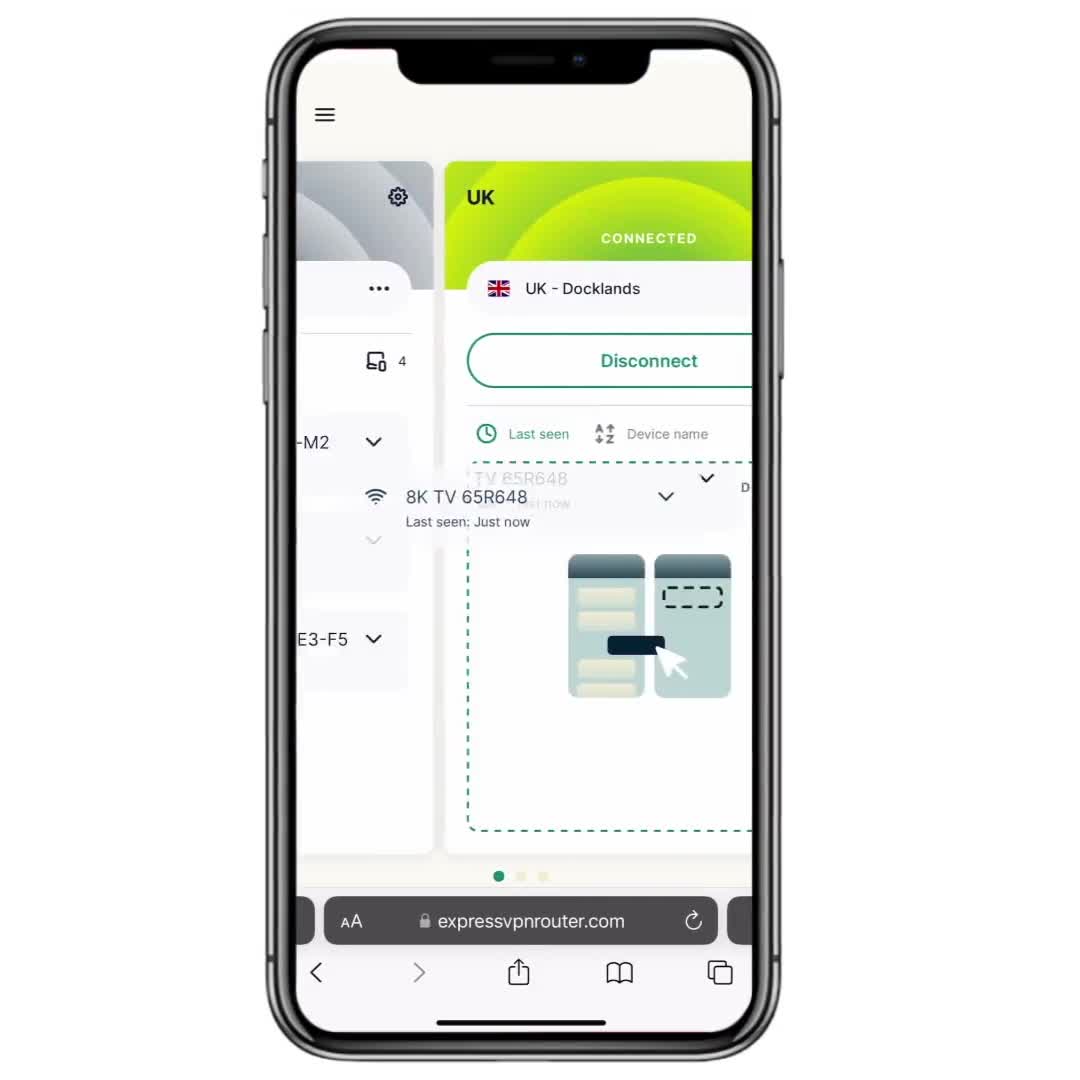 But not everything is smooth sailing. ExpressVPN’s debut hardware is newer to the game and, strangely, lacks common router features like parental controls and ad-blocking. Something as simple as booting unknown devices off of your network isn’t possible. Sure, you can pause service to it by putting it into a “No Internet” grouping, but this will use up one of five precious rule set slots. That isn’t a big deal if you have kids and frequently need to cut off their device access at certain times—that rule will already exist. But, we’re in our 20s and my household doesn’t need to do this, so I would have to give up a grouping to block internet to a device.

Without using any of the VPN features, the router’s baseline performance maxed out 312 Megabits per second (Mbps) in my tests. That’s quick, but is mediocre for a $200 device—similarly priced mesh systems that perform at an average of over 600 Mbps, with better range.

The Aircove does have solid reach, thanks to the four antennas on its top. I experienced full strength Wi-Fi bars at each end of my 1,400 square foot townhome. I was even able to eke out download speeds that averaged over 200 Mbps from these points, which is plenty generous—streaming 4K video requires just 50 Mbps. It even managed to punch through multiple walls and floors to provide over 1oo Mbps three stories below the router, so it will cover your outdoor cameras or reach into a smaller patio. But don’t expect coverage if you stray too far from your home. 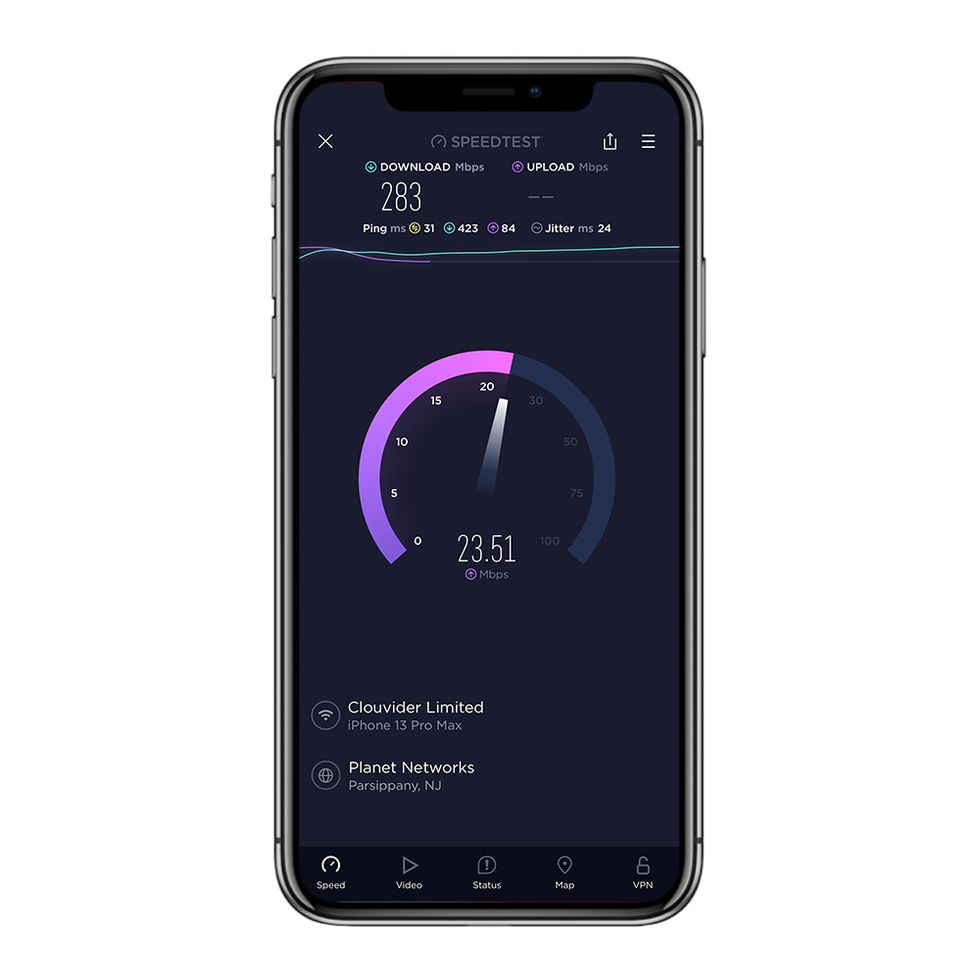 The Aircove averages about download speeds up to 300 Mbps in a normal speed test.

Then again, you’re buying this exclusively for its VPN features, which deliver an impressive performance. With my TV set to the UK, my laptop set to Mexico, and my Xbox Series X set to Canada, each device could still push over 140 Mbps simultaneously. It’s smart enough to handle and prioritize speeds to devices which require more bandwidth. While it works as a basic router its performance is nothing to boast about when you’re not using VPN. 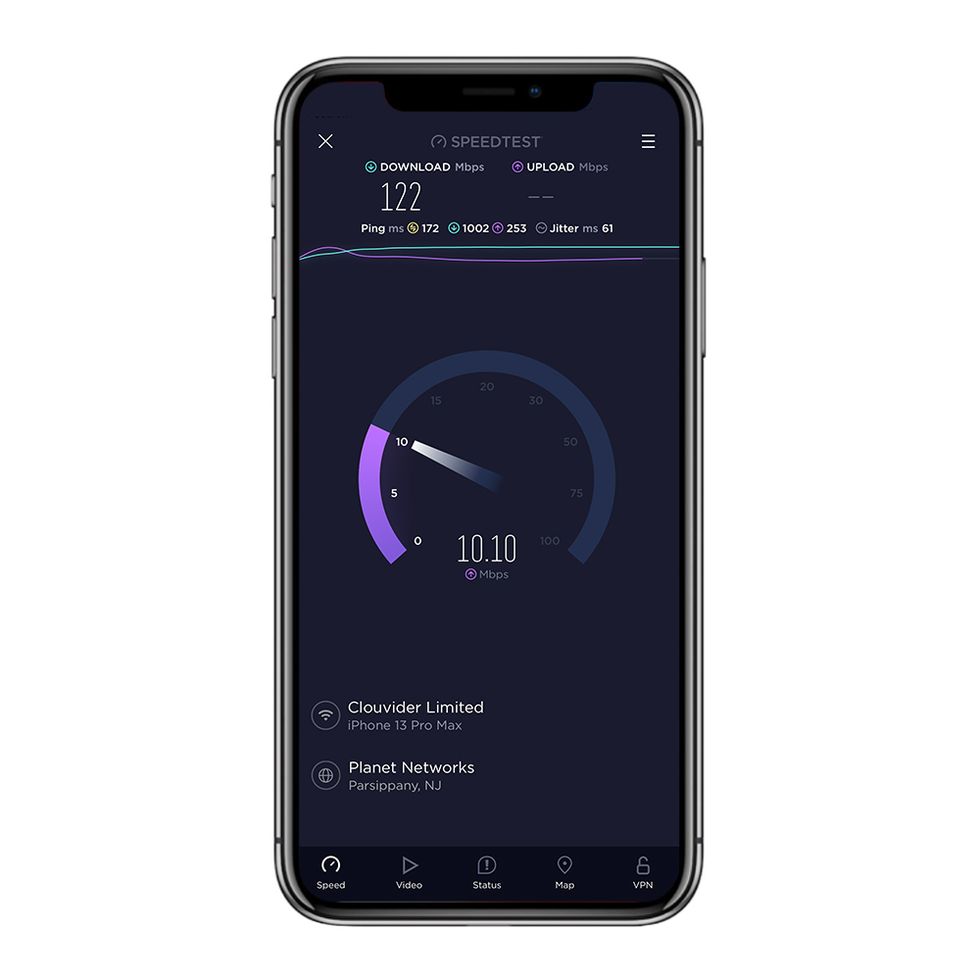 I found the Aircove’s speed often dropped by half while using ExpressVPN to make my device appear like it was in another country.

The Verdict: ExpressVPN’s Aircove router is feature packed if you’re looking for constant network protection for all of your devices. It lets you easily add encryption protection to all of your device types without installing software on any of them, you can hop between access locations, and even optimize device signals with a tap. This is a solid first step for the company’s hardware division, but I’d like to see a next generation of ExpressVPN routers come in a mesh system configuration, with more features added to the dashboard. This would remedy the lack of gigabit speeds while also expanding coverage for larger properties.

Hunter Fenollol, our resident expert of all things consumer tech, from smart home to VR gaming headsets, has years of knowledge creating product explainers, in-depth reviews, and buying guides to help you get the most from the latest electronics. Throughout college, he covered and reviewed the latest gadget releases for sites like Tom’s Guide, Laptop Magazine, and CNN Underscored. If he’s not elbow-deep in the latest hardware, you can find Hunter at one of Long Island’s many beaches, in Manhattan, or gambling away his paycheck.