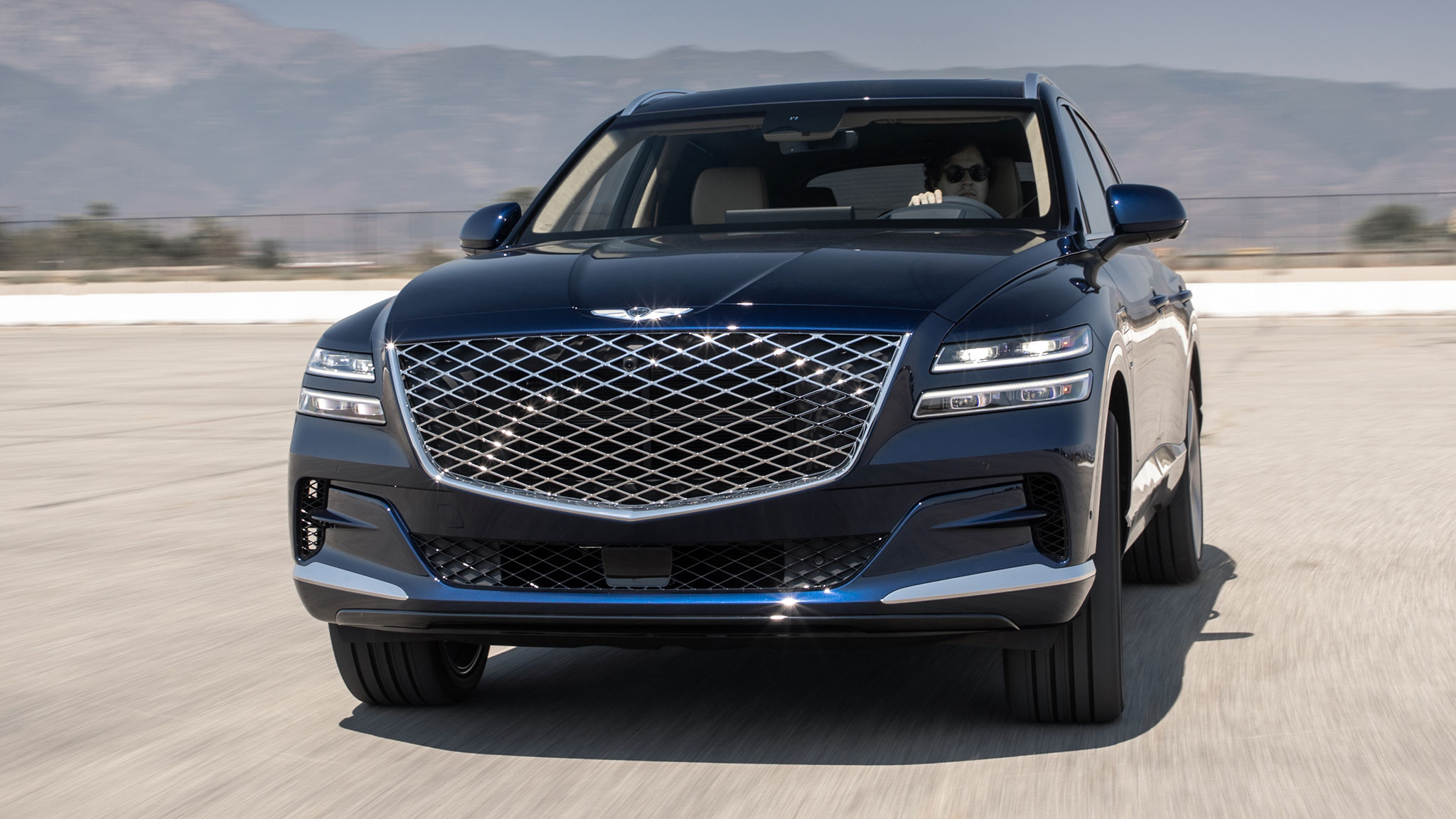 The SUV market has been red-hot for the better part of a decade, so plenty of confused-cat emojis ensued when Genesis pushed its nascent brand by launching a trio of sedans. Y NO SUV, guys?

Well, the wait is over. The Korean luxury marque, the premium offshoot of Hyundai Motor Co., finally has put a crossover on the market. Although the 2021 Genesis GV80 has all the touches one would expect from a luxury brand vehicle and will likely serve many upscale families well with its lavish interior, it may leave those looking for an enthusiast feel behind the wheel or a proper luxury vehicle ride wanting.

On paper, the GV80 looks ready for action. Like most midsize luxury SUVs such as the BMW X5, Mercedes GLE-Class, and Lincoln Nautilus, the GV80 provides a choice of two powertrains: a 300-hp, 311-lb-ft turbocharged 2.5-liter four-cylinder or a 375-hp, 383-lb-ft twin-turbo V-6. Both engines mate to an eight-speed automatic transmission.

Doesn’t sound like much of a difference, and with a starting price gap of about 10 grand between a base turbo-four and the entry-level V-6, you might think about saving a few bucks if a half second isn’t a deal-breaker. You’ll also save a few bucks at the pump. According to EPA figures, the four-cylinder nets 21/25/22 mpg city/highway/combined, while the twin-turbo-six gets you 18/23/20 mpg. That said, features editor Christian Seabaugh noted: “This 2.5-liter engine doesn’t make much low-end power, and it gets coarse and grainy up high in its powerband.”

But raw acceleration numbers don’t tell the whole story. Head of editorial Ed Loh said: “There’s a bit of lag in the throttle tip-in and downshifts. The 3.5 sounds good and definitely gets up and goes, but powertrain response is delayed and makes the entire package seem a bit disjointed and not as tight as it could be.”

Again, comparing to the Mercedes, the base GLE 350 was slower around the figure eight at 28.2 seconds, and the GLE 450 4Matic was also a touch slower, though its 0.69 total average g-vector figure around the course is impressive.

Braking from 60 mph was 117 feet for the entry GV80, and the upmarket V-6 model shaved five feet off the number—impressive given that it weighs 270 pounds more. In this instance, the Genesis stomps the Mercedes: The GLE 350 requires 130 feet, and the GLE 450 takes 115 feet to come to a stop. Both Nautiluses needed 117 feet to come to a halt.

But again, it’s not so much the numbers you get from the Genesis as how it delivers them.

During our SUV of the Year testing, judges commented on a lack of steering response and difficulty in matching the cornering and precision of European SUVs.

“There’s no feel, and thanks to the very quiet luxe-oriented tires, no grip,” Seabaugh said. “On a curvy road, the driver is working overtime just to keep the GV80 centered in the lane. I’m not asking for a sporty drive experience because Genesis, like Lincoln, has eschewed that as a brand value. But the GV80 should nevertheless give you confidence as you drive down a narrow, twisty road.”

Perhaps a bigger issue is the GV80’s harsh ride over unexpected bumps and jolts.

“Even in Comfort mode, it rides like other cars’ Sport mode,” features editor Scott Evans said. “I don’t know why it’s so stiffly sprung and damped. The body is just constantly in motion. You’re getting jostled all the time by every possible imperfection in the road. You can be sporty and still ride well.”

If you can look past those issues and become ensconced inside the cabin, the GV80 rewards you handsomely. From the diamond-stitched seats (with a ridiculous number of adjustments including modifications for posture) to the crisp Lexicon stereo, from the three-dimensional instrument cluster to the “nature sounds” chillout function, the Genesis delivers a luxury experience.

“The GV80’s interior shows that Genesis is serious about being a luxury carmaker,” senior features editor Jonny Lieberman said.

But to channel Ludwig Mies van der Rohe for a moment, “God is in the details,” and here the Genesis still has some learning to do.

After complaints that its early-gen sedans’ infotainment display and user interface felt too much like those of a mere Hyundai, the Genesis system has swung wildly the other way. A recessed, beveled scroll wheel controls all functions, and the icon displays and interaction carry a distinct Mercedes MBUX vibe—and not necessarily in a good way.

“It’s hard to use, difficult to get used to, and its screen saver comes on after a few seconds of you trying to use the infotainment,” MotorTrend en Español‘s Miguel Cortina said. “Everything seems to be buried in menus.”

Overall, though, “The interior is a knockout,” Loh said. “The exterior is crisp, sharply tailored, and the package overall is quite compelling. The car is very pleasant to be in and zone out. It’s quiet and nice for a turn-off-your-brain cruise. I would be very concerned if I was Lexus, Acura, or Infiniti.”