BMW shows electrified wingsuit in action over the Austrian Alps 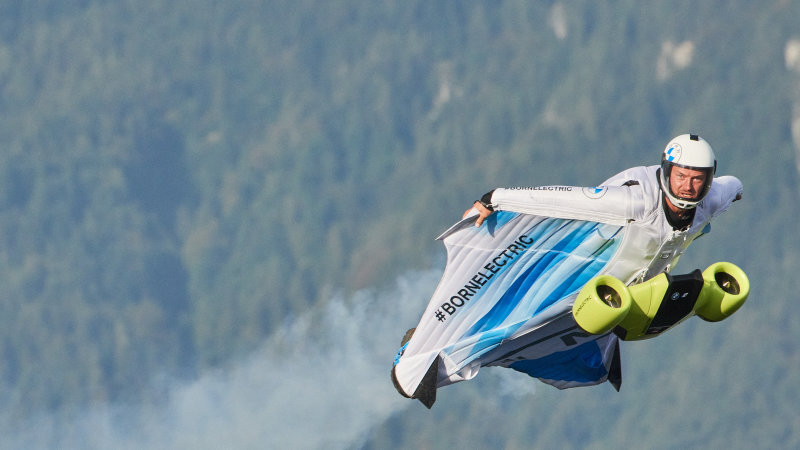 BMW found a creative way to showcase its expertise in electrification. Its i division teamed up with its Designworks studio and intrepid stuntman Peter Salzmann to develop, build and test an electric wingsuit.

Designing the device, which the German carmaker calls simply Electrified Wingsuit, took about three years. It consists of two main parts: a suit with wing-like pieces of fabric reminiscent of a flying squirrel’s fur-covered skin membranes, and a compact electric drive unit that houses a pair of carbon propellers capable of spinning at 25,000 rpm. They deliver a total output of 15 kilowatts (roughly 20 horsepower) for as long as five minutes.

BMW notes the drive unit was extensively tested in the same wind tunnel it uses to shape its cars in Munich, Germany. It tips the scale at approximately 26 pounds thanks to the use of carbon fiber and aluminum.

Wingsuit flying has been around for decades. Thirty-three-year-old Franz Reichelt notably died in 1912 while trying to test an early prototype by jumping off the Eiffel Tower, but adding electrification to the equation lets users reach action movie speeds of up to 186 mph. It also allows for more constant gliding over much longer distances. It gives the power of flight to whoever is brave enough to strap in; it’s like a jet pack without the jet fuel.

Salzmann tested the Electrified Wingsuit by jumping out of a helicopter hovering about 9,900 feet over the Austrian Alps, and BMW caught his descent on camera. He lived to tell the tale, he landed safely by deploying his parachute at the end of a long, roller coaster-like glide, and he’s looking forward to further developing this technology.

Don’t expect to see one displayed next to a 3 Series at a BMW dealer, however. Autoblog learned from a company spokesperson that there are no plans to bring the Electrified Wingsuit to the public.