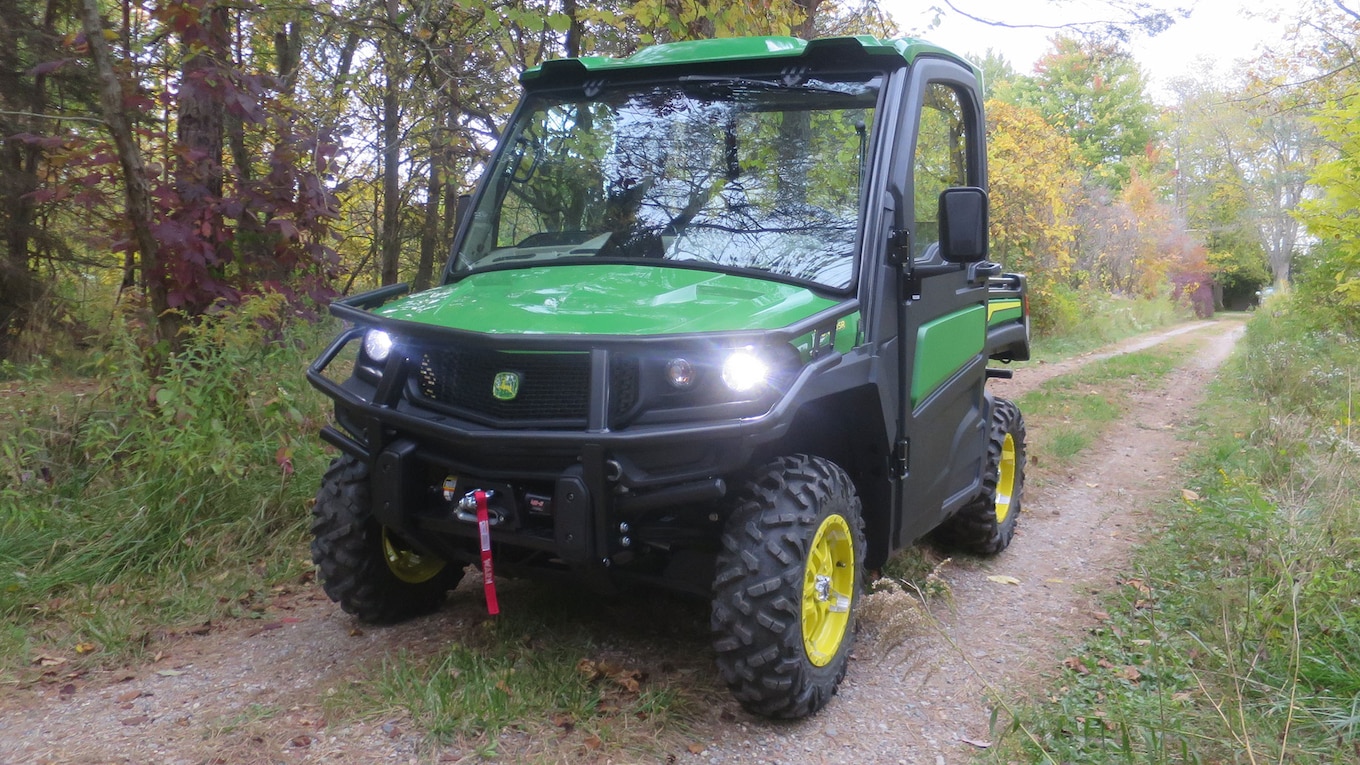 My dad has never hesitated to press his cars into temporary off-road agricultural duty. I vividly recall riding with my sister on a large board roped to the rear bumper of our ’70 VW Beetle as Dad ran a pattern throughout the back yard in an effort to work sand down through the Bermuda grass and into the tough red Memphis clay. He taught me: Never fence a yard without preserving vehicle access. I never have. These days, there’s a whole industry that purpose-builds side-by-side ATVs to do jobs like what dad used our Beetle for, and I just spent three weeks with a pretty cool one: a 2021 John Deere Gator XUV835R.

What is a John Deere Gator XUV835R?

This is the flagship, full-size model that tops John Deere’s range of Gator side-by-side ATVs, or more accurately: UTVs (for Utility Task Vehicles). That distinction is important as the side-by-side market kind of subdivides into those designed to do work, and those trying to be mini Ford Raptor fun machines. Gators are mostly the former, and the lineup opens on the smaller end with the Work Series, available in rear-drive, four-wheel drive, and six-wheel designs with 1,000-pound payload capacity limit and a choice of gas, diesel, or electric power, with base prices spanning from $7,899–$13,299. Next up is the Mid-Size Crossover XUV line, with standard 4WD and two wheelbases for carrying two or four passengers and 500 pounds of cargo, with base prices ranging from $9,599–$14,999. Deere’s Full-Size Crossover XUVs like our test vehicle are billed as “built to work like a truck in places that a truck can’t,” and boast a 2,000-pound towing capacity, low-range gearing, and locking differentials, with full weather protection and climate control available. Base pricing starts at $14,699 and climbs to $27,399 with diesel power.

John Deere doesn’t usually loan its side-by-sides to the automotive press, but a host of improvements for 2021 aim to make the Gator so much more car-like that it suddenly made sense to do so. These include improved transmission controls with the addition of a “park” position, an enhanced digital dash display, easier gear shifting, and electric power steering. Two electric toggle switches now engage the 4WD and the rear differential lock, and the 2021 XUVs are available with a full range of over 100 attachments, including sprayers, snow blades, and winches tailored to attacking myriad jobs. I deemed the timing of this offer providential, as I was just finishing up some major projects around my place on Lake Huron, so I asked for one equipped at a bare minimum with the winch and power dump box. John Deere set about constructing a well-equipped XUV835R for me that rang the register at a decidedly carlike $29,408.

Power comes from a mid-mounted 812-cc (0.8-liter) DOHC 12-valve inline-three-cylinder John Deere engine. A centrifugal clutch gets things moving, after which a belt CVT automatically adjusts its effective gear ratio to account for heavy loads, thick mud, steep hills, etc. And should a load or grade prove too much for the standard range—as happened when I attempted to tow a 40-foot dead pine tree top first into a grassy field with all its branches still attached—engaging low range introduced sufficient torque multiplication to get the XUV going and park that tree where I wanted it. There’s no center differential, and as noted, the rear can be locked; up front there’s an auto-locking differential to make the most of the abundant traction afforded by the bigger, knobby Maxxis Bighorn tires that came packaged with our test vehicle’s $900 aluminum wheels upgrade.

The Gator fits steel control arms, coil-over shock units, and disc brakes at all four corners, with an anti-roll bar in the rear and robust half-shaft boot protection in front. A full 7.9 inches of suspension travel are provided to absorb heavy terrain. And the power steering isolates the driver from kickback and provides three easy turns from lock to lock while negotiating a U turn without leaving the road surface on most two-lane roads.

Where Can You Drive a John Deere Side by Side ATV?

Rules for driving off-road vehicles and unlicensed all-terrain vehicles vary from jurisdiction to jurisdiction. For example, in Sanilac County, Michigan, where my place is, purchasing an ORV license for $26.25 and displaying it on the rear glass makes it legal to drive on secondary roads, and for short distances on state highways to access secondary roads. My property fronts a state road, and everyone assured me that driving the quarter-mile south to a dirt road, or the 1.6 miles into Lexington for gas or to visit the grocery store, would be no problem. My county caps the speed limit at 25 mph for ORVs on its roads. Sadly, St. Claire County to the south, which I’d need to traverse to rent must-have gear like a wood-chipper, cedes ORV regulation to individual townships and the ones I’d pass through en route to the equipment rental place do not permit on-road ORV use. So, if you anticipate needing to leave your own property, study the legal landscape before you buy.

I slapped our Vbox on the roof and set out to do some testing both on gravel and on pavement. Acceleration proved to be slightly quicker on pavement, with the best runs recorded in four-wheel drive. The XUV835R’s top speed is listed as 45 mph but ours gamely pulled to 53 mph. It accelerated to 50 mph in 16.8 seconds on its way to a 22.7-second 52.2-mph quarter mile. That’s slower than just about every other vehicle we’ve tested, but it does handily smoke the 2005 Gem e4 neighborhood electric vehicle in which we clocked an even more leisurely 40.1-second, 23.6-mph quarter-mile run.

What About Stopping and Turning?

Braking distances from 50 mph were considerably shorter on gravel—87 feet versus 127 feet on pavement—because as we’ve long known, it helps to pile dirt up in front of the tires (anti-lock braking is not offered). We only circulated a gravel skid pad because there were no large, empty, paved lots near my lake place. On this surface we measured 0.58 g of lateral grip in 4WD mode with the differential locked. Driving in circles was a bit more fun and drifty in rear-drive with the diff locked, but that mode shaved about 0.03 g off the result. Please note that here again, that Gem e4—the only other vehicle against which we can legitimately compare the XUV835R—logged a pitiful 0.35 g.

Carlike in Some Ways, Not in Others…

I’m sure that the carlike shifter with a park position is a boon to many, but we wish it had been oriented right-side-up. As is, Park is at the bottom and you shift up to R, N, H, and Low is at the top. As a result, I frequently moved the shifter two notches in the wrong direction when thinking I was going from forward to reverse or vice versa. The plastics lining the shift gate had also started to discolor from wear in just 20 miles of use. The turn-signal is a left/right toggle switch with no self-canceling, but this is acceptable for as infrequently as the Gator should find itself signaling in automotive traffic. The digital gauge cluster is neat, except that the tachometer and speedometer feature no demarcations. They both feature a digital readout in the center of a graphical sweep, but you don’t know what the redline value is until you reach it (it’s about 4,650 rpm, but the Gator bravely accelerates way beyond that). The ignition key isn’t omnidirectional; you must remember which way it goes into the ignition and door lock cylinders. Speaking of which, they’re the only way to lock and unlock the doors—there’s no inside lock button or knob (so if you lock the doors cylinders, then drive the vehicle, then lock the keys inside, a coat hanger will be of no use).

The windshield can be fully opened with gas struts holding it horizontal, or it can be propped open a couple inches at the bottom to allow a breeze in while driving—kind of like you used to be able to do with a Model A Ford. You will need to lower a side window to get a breeze going, however, because the cabin seals up nice and tight (so tight you may find yourself re-slamming the doors when all the windows are closed).

Front and rear hitch receivers: Sometimes while exploring a trail, you may find yourself blocked by an obstacle, as happened to me with a fallen tree. Presuming it’s not so large that you may need low range to budge it (low only engages for driving forward), just move the trailer hitch to the front, loop your tow strap around the tree, and reverse it out of the way. That 4,500-pound Warn winch (an $881 option) comes with a remote control that plugs into the glovebox and proved more than up to the task of snatching everything I attached to it. Oh, and the Park position proved sufficient to hold the XUV835R in place—we never missed the optional parking brake.

The $874 power box lift system made quick work of loading and unloading a heavy water pressure tank, not to mention loads of wood chips and dirt. And while I’m sure one is not encouraged to “hose out” the interior, every cupholder, cubby, and bin on the interior features a drain hole, as does the deep well under the passenger seat that doubles as an ice chest. Oh, and like the fanciest new pickup trucks, the Gator’s tailgate includes yardstick inch demarcations for measuring cuts in the back country.

What Does the John Deere Gator XUV835R Compete With?

About the next closest competitor appears to be Bombardier’s Can Am Defender Limited, which starts at $25,599. It also offers a “season proof” fully climate-controlled cab and boasts a stout 82-hp, 69-lb-ft Rotax V-twin engine rated to tow 2,500 pounds (3,000 in 6×6 configuration), but it lacks the Gator’s breadth and depth of task-specific factory accessories. The Arctic Cat Prowler Pro offers full doors and windshields and roughly matches the Deere’s engine specs, but it doesn’t offer full HVAC. Most of the Gator XUV835R’s other competitors—including Honda’s Talon 1000 lineup, the Polaris General XP 1000, and Yamaha’s Viking EPS—lack the option of an enclosed, let alone climate-controlled cab.

Should You Buy a John Deere Gator XUV835R?

If you’re unwilling to drag your kids around the yard behind a Beetle, and you face a lot of towing and hauling needs around your property in places not easily accessed by a traditional pickup truck, maybe a dedicated side by side UTV makes sense. This one certainly has much to recommend it. For my personal use case, I’d be better off with a narrower Work Series model I could wedge down some trails I’m blazing on the front half of the property. I close my property down in the winter, so an open cab suits me fine. With a winch, a power box lift, and a front brush guard, such a Gator HPX615E would price out in the mid-$13,000 range.