That’s a Wrap! How Tyler Reddick’s No. 8 Camaro Went from Blank Canvas to Race-Ready 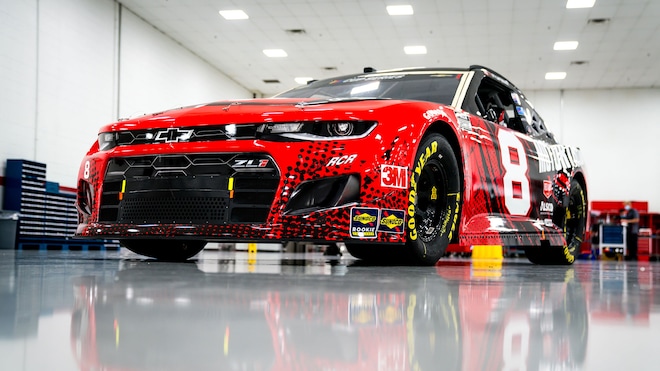 MotorTrend has teamed up with Richard Childress Racing (RCR) and driver Tyler Reddick to be the lead sponsor on the team’s No. 8 Chevrolet ZL1 Camaro! Of course, that means that the car had to be appropriately wrapped in all of its MotorTrend glory before the big Xfinity 500 Cup Series race at Martinsville Speedway in Virginia (check out the time-lapse video of the process below!).

Related: Get an inside look into this unforgettable 2020 NASCAR season and prestigious playoffs. Stream the new MotorTrend docuseries, NASCAR 2020: Under Pressure on October 31 only on the MotorTrend App. Start your free trial now!

Watch Tyler Reddick’s No. 8 Get Wrapped!

The design started with a rendering that was approved by all the parties and then given to the design team at RCR’s Graphics Center so they could turn the one-dimensional ideas into a wrap that would work on a three-dimensional Cup car.

Once the design was finalized, it was sent to one of the Graphic Center’s massive Roland VG2-640 printer/cutter.

Printing an entire car takes a while, but in a few hours, the Roland units were able to churn out all the required panels for the No. 8 Reddick Camaro.

Think of the car as being divided into sections: two sides, nose, hood, roof, deck lid, rear. Many of the wrap panels have reference marks built in to help the installers make sure everything gets lined up right during installation.

Details like the headlights, taillights, grill, ZL1 grille, and other features are stickers that are applied to the wrap in the final steps. The wrap itself is typically laminated to help it hold up better, and leading edges of the car, which sees the most abuse, are further protected with Xpel clear film.

The car starts out looking like this. The grey primer helps the wrap adhere better to the metal

The wrap process takes two RCR installers about four hours to pull off. Then again, they’ve done this hundreds of times. A lot of the process involves squeegees, butane torches, and a lot of skill to keep from destroying a very expensive wrap (both in terms of materials and manpower). We’re always amazed at how they can get the flat wrap to conform to some very complicated shapes.

Carefully trimming the wrap with a razor knife is one of the last steps in the process.

Wraps are all about branding and getting the sponsor’s message into the eyeballs and grey matter of viewers. For example, the deck lid was set up to promote MotorTrend’s new NASCAR 2020: Under Pressure docuseries, which premieres Saturday, October 31, on the MotorTrend App.

And here’s Tyler Reddick’s ZL1 Camaro all kitted out and ready to race! You would be hard-pressed to notice that the headlights and grille are stickers.

Reddick was also featured in the MotorTrend App’s NASCAR All In: Battle For Daytona, which is a sports documentary series that chronicled the off- and on-track commitment, struggles, and sacrifices of Reddick, RCR teammate Austin Dillon, and Corey LaJoie of Go Fas Racing as they chased the checkered flag at the 2020 Daytona 500. Both of these series are part of the MotorTrend App’s special collection of NASCAR content.

The post That’s a Wrap! How Tyler Reddick’s No. 8 Camaro Went from Blank Canvas to Race-Ready appeared first on MotorTrend.