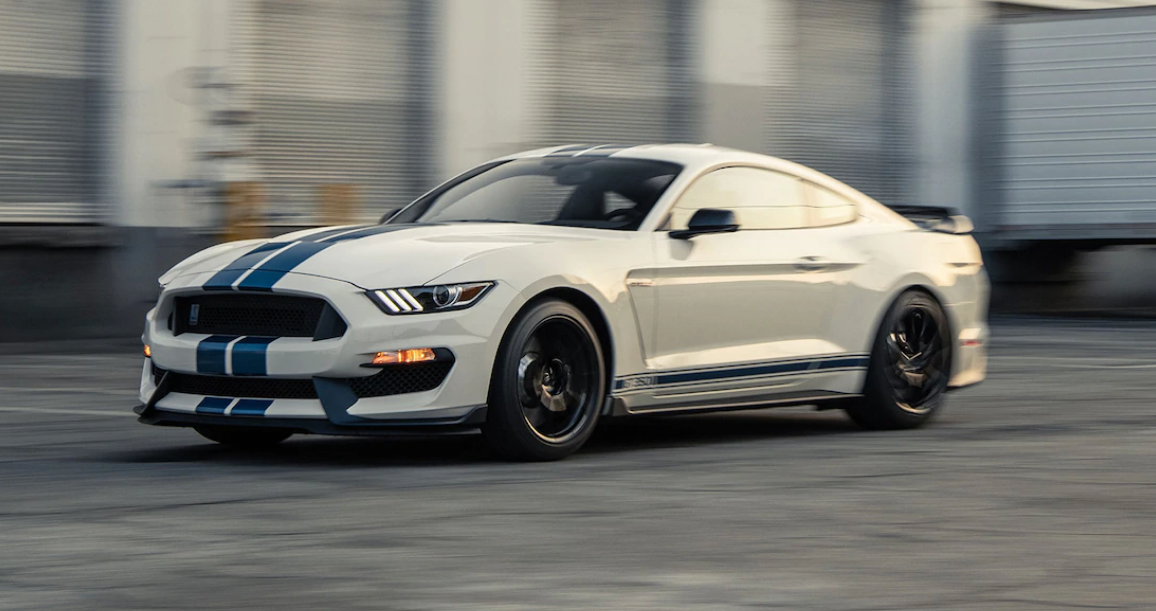 The Ford Mustang Shelby GT350 is a hellacious beast, a flat-plane-cranked track and backroad warrior that certainly ranks among the best-driving factory cars ever conceived. Yet despite the GT350’s fearsome abilities, it’s also a shockingly capable daily driver thanks to a well-sorted ride, familiar interior ergonomics, and a feel that’s visceral and fun even around town.

Unfortunately, Ford is discontinuing the GT350 and its harder-core GT350R sibling after this model year, so the Heritage Edition tested here serves as something of a send-off. Introduced for 2020 and available for both versions of the car, the $1,965 bundle brings no mechanical changes, adding only the legendary Wimbledon White/Guardsman Blue livery, some blue badges, and a dash plaque. (The price and look are nods to the original GT350’s victory in its debut race, with Ken Miles behind the wheel, in 1965.)

Underneath the iconic visuals, an update last year brought learnings from the development of the mighty GT500, resulting in stickier Michelin Pilot Sport Cup 2 tires, retuned dampers and springs, updated aero, and recalibrated braking-system electronics. There were no changes made to the sonorous and vicious 5.2-liter naturally aspirated flat-crank V-8. Given we’ve already driven and tested the 2019 GT350, this cosmetically enhanced 2020 version’s performance came as no surprise. But when you have a chance to cane a special Mustang, you cane a special Mustang. For science.

As with previous GT350s, extracting maximum off-the-line thrust in our non-R test car was a matter of road test editor Chris Walton dumping the clutch and carefully managing the throttle to maintain traction. Making the same 526 hp and 429 lb-ft, the 2020 GT350 Heritage Edition scorched to 60 mph in 4.1 seconds and through the quarter-mile in 12.4 seconds at 115.8 mph, with the Voodoo V-8 howling like hell’s own death sled. Those times are each just a tenth behind those we recorded during a comparison test with the Porsche 911. So, let’s call it confirmed: Stripes do not, in fact, make a car quicker.

The GT350’s handling remains sublime, and the communication from its tires to your fingertips gloriously direct. On warm rubber, the car knifes toward apexes with alacrity, and the intensity of the signals sent through the steering wheel shocks your hair on end like the world’s most wicked Van de Graaff generator. The six-speed manual’s throws can be long and overly stiff, but those are the only issues with the primary controls, which offer precise responses only matched—and exceeded (if you can believe it)—by those of the stonking, 760-hp GT500.

The brakes are as strong, consistent, and confidence-inspiring as ever, with Walton recording a 60–0 distance of exactly 100 feet. A one-off result? Hardly. The five stops used to determine the final number rang in between 100 and 102 feet. The rear end wiggles some under hard braking, but the GT350 never feels like it’s going to come around on you, and any slides are easy to catch. And, as testing director Kim Reynolds noted while recording this GT350’s 1.04 lateral-g and 24.1-second figure-eight figures, even with the stability control deactivated, a soft electronic net remains active should your hubris somehow exceed the car’s stupid amount of grip.

With the current-generation Shelby GT350 now at the end of its line, the 2020 Heritage Edition is a fantastic reminder of a lineage well worth celebrating—and enjoying at the limit.