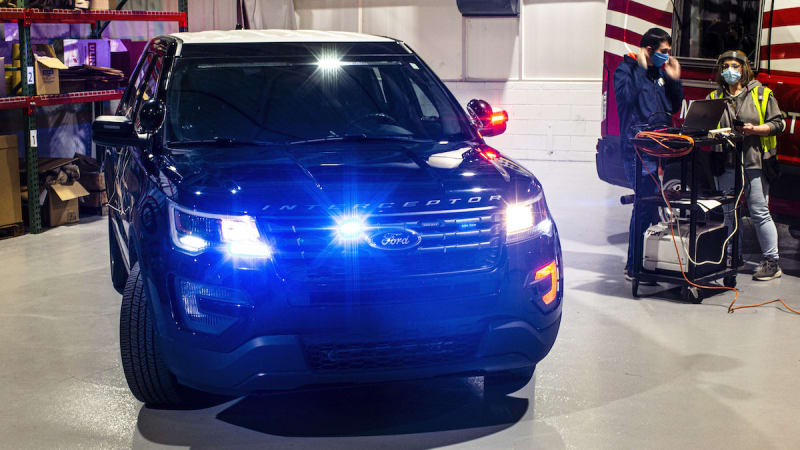 Ford has rolled out new software aimed at disinfecting the interior of its Police Interceptor Utility vehicles to help officers minimize the risk of exposure to the coronavirus. The solution raises the cabin temperature to above 133 degrees Fahrenheit for 15 minutes between vehicle deployments, which Ford says is long and hot enough to disinfect touchpoints. It’s available now for all Police Interceptor Utility models dating back to 2013.

Engineers first began working on a project to de-contaminate vehicles using heat in March. Shortly thereafter, Ford says it heard from the New York City Police Department about the need for a more efficient way to disinfect police vehicles, since police were often being dispatched as emergency responders when ambulances weren’t available and often transported asymptomatic passengers.

The software fix engages the vehicle’s powertrain to run at a higher idle level, according to the Detroit Free Press, with the climate control system transferring the excess heat into the cabin. The software also monitors the interior temperature and maintains it for the full 15 minutes. While it’s running, hazard and taillights will flash in a pre-set pattern to signal when the process has begun, then change at the end to mark completion. Progress is also indicated on the instrument cluster. On newer models, activation is done via a smart sequence of commands involving pressing cruise control buttons in a predefined order, while an external tool that connects to the onboard diagnostics port will power it on 2013-2015 models.

Ford worked with microbiology researchers at Ohio State University, who determined that exposing the coronavirus to temperatures of 56 degree Celsius (132.8 degrees F) for 15 minutes lowers the viral concentration by greater than 99% on interior surfaces and materials. Ford said it conducted operational trials with police vehicles in New York City, Los Angeles, Michigan, Massachusetts, Ohio and Florida. It’s meant to be used in conjunction with other safety and cleaning protocols.

Ford says it is looking to bring the software capability to other police vehicle models.