Streets converted to restaurant patios in cities across America 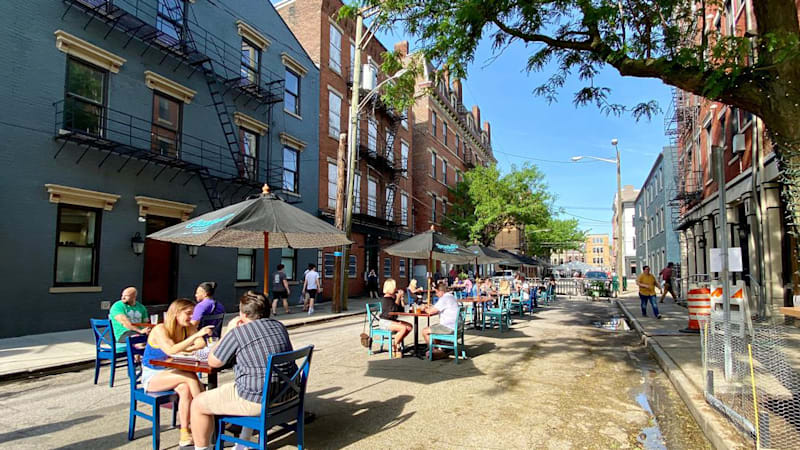 As cities slowly emerge from the stay-at-home orders and shutdowns forced by the COVID-19 pandemic, city planners are looking for novel solutions to help kickstart their economies. Even when reopened, many restaurants and stores will suffer due to lack of demand, and in some cases, too much demand for the amount of space available. As a way to add restaurant space to help maintain social distancing guidelines as customers return, some cities are closing popular streets to allow for extended outdoor seating.

In early May, San Jose, California, announced its reopening plan. Within that plan is “Al Fresco San Jose,” an idea to allow restaurants to use closed streets, parking lots, sidewalks, plazas, alleys, and recreation areas for outdoor business use. The more space these restaurants are allowed to use, the better they can enforce social distancing while attempting to claw their ways back to successful operation. Better business would hopefully help laid off or furloughed workers get back to their jobs. So, closing streets would not only allow for safer environments, it could help stimulate the economy, as well.

Several other cities are considering similar plans. In Tampa, Florida, the “Lift Up Local” initiative allows select restaurants to place tables in the street, though rain and unbearable summer weather could present an issue. In Cincinnati, at least 15 streets will be fully or partially closed. On a smaller scale, Ashland, Oregon, plans to close a portion of its main street for at least eight weeks to allow for downtown recovery, according to The Oregonian.

Additionally, some cities such as Oakland, have launched separate programs to allow for easier general social distancing for outdoor activities, not just at businesses. Thus far, Oakland has expanded its Slow Streets program to 20 miles and 17 corridors.

These closures do not simply come at the single word of a mayor or council person, however. Numerous challenges such as transportation corridors, permits, and other legalities could present issues. Read more about the city closures and what needs to happen before they can close on The Washington Post.