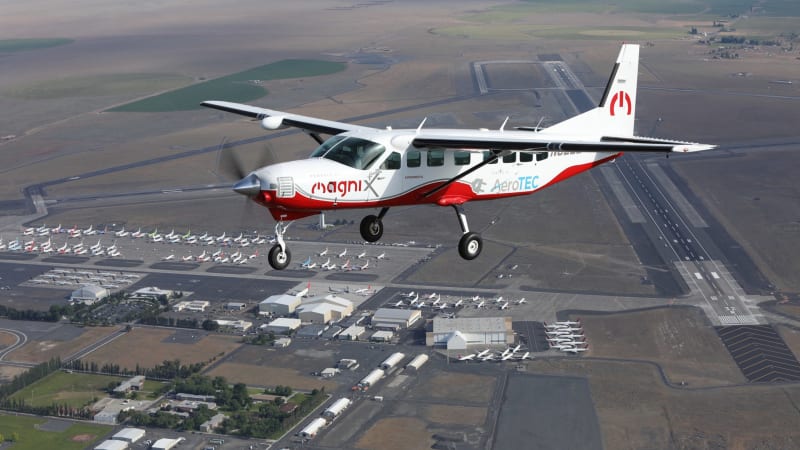 Hopes for one day powering commercial airplanes with electricity instead of fossil fuels took a big leap forward this week when a Cessna commuter propellor plane modified to run on electricity successfully completed a 30-minute test flight in central Washington.

Two Seattle-area companies were behind the feat: MagniX, which designed the electric motor, and AeroTEC, an aerospace engineering and certification company that modified the plane. They say it was the largest all-electric passenger or cargo aircraft ever to fly. The test also follows a similar first flight in Vancouver in December of a seaplane powered by the same MagniX electric motor.

Normally seating up to 14 passengers, the Cessna 208B Grand Caravan that circled Moses Lake, Washington, was retrofitted with a 750-horsepower/560 kW Magni500 electric motor that weighs 297 pounds. Power came from a 750-volt lithium-ion battery system that weighs two tons, including cooling equipment. Those batteries took up most of the cabin, leaving little room for passengers, MagniX CEO Roei Ganzarski told the Seattle Times.

The low energy density of batteries has been a major barrier to economically feasible commercial air travel, a market MagniX is targeting, and the test highlights the ever-growing need to develop smaller and lighter batteries. While air travel accounts for a far smaller share of global CO2 emissions than either passenger cars or powerplants, airplane emissions have grown much faster than predicted as global demand for air travel (notwithstanding the current coronavirus pandemic) exploded.

The two companies are pitching the modified Cessnas as perfect for operating routes of less than 500 miles that transport 5 to 12 people between regional cities formerly operated by small, so-called “commuter” airlines, AeroTEC CEO Lee Human told FlightGlobal. Those carriers have mostly all folded as the airline industry moved to larger regional jet service. The Times also notes that because Cessnas and similar-sized planes are already certified by the Federal Aviation Administration for commercial flights, getting modified e-plane versions certified should be faster than certifying an all-new electric airplane design. Ganzarski said he expects his propulsion system to be certified by the end of 2021.

FlightGlobal also reports that because they burn no fuel, have fewer moving parts and less complexity than conventional jets, electric Cessnas cost only about half as much to operate as internal combustion engines. The Magni500 reportedly consumed about $6 worth of electricity during the half-hour test flight.