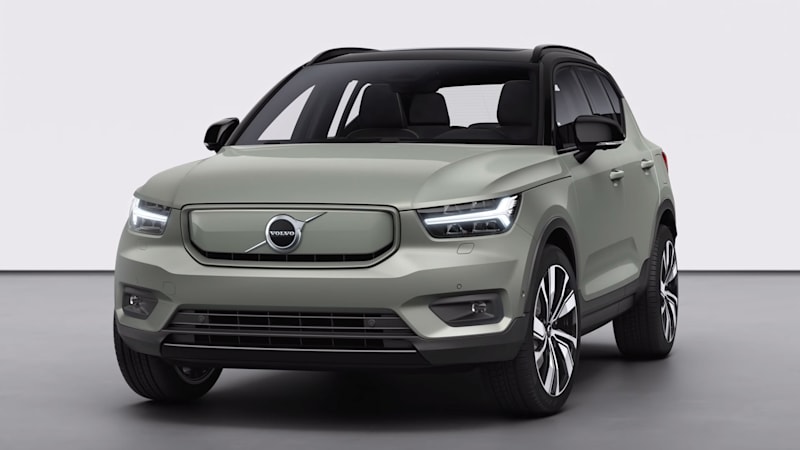 Volvo gathered four executives to host an in-depth, 14-minute walkaround video of the coming XC40 P8 Recharge, for any considering Volvo’s first punch into the pure electric space. Occasionally conveying the soothing, informative air of a pre-flight safety briefing, Senior Product Manager Beatrice Simonsson starts with a flyover of the new compact crossover. The automaker has settled on a range estimate of “over 400 kilometers” (250 miles) on the WLTP cycle, thanks to the crossover’s 78-kWh battery pack. Dual motors with a combined output of 408 horsepower and 487 pound-feet of torque handily outclass not only the traditional XC40 models in the lineup, but every competitor in the segment, too. Even considering the Volvo’s weight, the only hot compact crossovers that can beat the XC40 Recharge to 60 miles per hour are scorchers like the Mercedes-AMG GLA 45. That swiftness comes partly thanks to 255/40 Pirelli P Zeros on optional 20-inch diamond cut rims.

Built on the same CMA platform as the standard car, the Recharge loses nothing in space nor convenience. The rear seats fold flat, the cargo area swallows the same 14.6 cubic feet as the ICE models, and can hide the parcel shelf under the load floor when the shelf isn’t in use. The front trunk can hold a large duffel bag atop the charging cables and tire repair kit. Sensors register the presence of the driver and key, so the driver only needs to press the brake pedal, put the vehicle in gear, and take off. A button in the load bay unleashes a nifty flip-out trailer hitch, good for hauling 3,300 pounds. There will be eight color choices for the Recharge compared to six for the standard model, one of those eight being a new Sage Green (pictured) that’s not currently part of the XC40 palette. Inside, four themed packages mix and match fabrics and trim materials, one of those themes including leather-free surfaces.

Check out the video for more on the crossover leading Volvo’s electrification push, like the redesigned front end, new elements of the driver interface and Google-based infotainment system, and equipment to serve driver assist and eventual autonomous features. After strong demand when order books opened in January, deliveries should begin here late this year. We await details on the MSRP, but Volvo said the XC40 Recharge will come in under $48,000 after subtracting the maximum $7,500 federal tax credit.