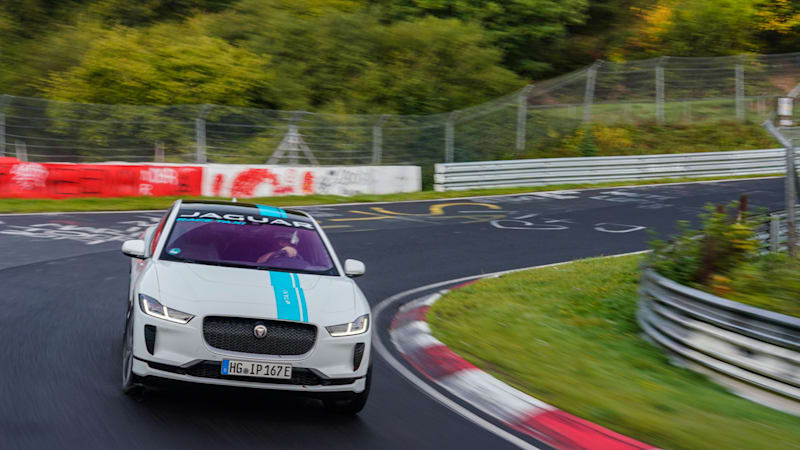 Jaguar-Land Rover’s SVR division has only put its name on high-horsepower gasoline-burning cars, like the XE Project 8 built in strictly limited numbers. It’s open to the idea of tuning electrified models, whether they’re electric or hybrid, but it confirmed it’s not currently planning on making a spicier evolution of the I-Pace.

“We will be developing electrified versions of our cars, be that fully electrified or plug-in hybrids,” affirmed Michael van der Sande, the division’s managing director, in an interview with Auto Express. But although the electric I-Pace (pictured) raced in a one-make race series held on the sidelines of Formula E events for two seasons, and SVR could credibly claim to inject track DNA into a street car, it stressed the I-Pace doesn’t appear in its product plans for reasons that remain a little bit murky. Jaguar announced the end of the eTrophy series in May 2020, which might explain why it’s reluctant to exploit racing’s marketing power.

“There are other various things we are working on which we can’t talk about, but we’re very interested in electrification. That’s why we got involved in eTrophy,” van der Sande clarified. “The technology transfer, the learning applies to that car and other cars but we’re not planning an SVR I-Pace at the moment.”

His comments confirm we’ll need to be patient to see what SVR’s take on an electric or hybrid car looks like. One of the first electrified models to receive the go-fast treatment might be the next-generation XJ tentatively scheduled to make its debut before the end of 2020. It will be exclusively electric, though it won’t look as radical as the I-Pace, so Jaguar will need to find a way to replace the hot-rodded XJR 575 model it positioned at the top of the last-generation model’s line-up. It’s not too far-fetched to speculate the next Range Rover also due out in the coming months will receive some degree of electrification, and it could spawn an SVR-tuned model, too.