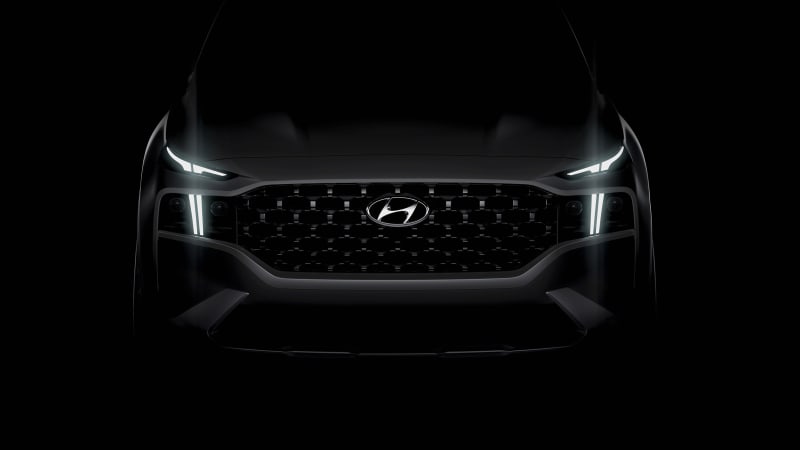 In February, South Korea’s KKS Studio rendered a facelifted Hyundai Santa Fe based on spy shots of prototypes spotted around that country. The image showed a full-width grille, thick in the middle and pinched under the headlights, anchored at the edges with a set of DRLs forming a wide “T” shape that started above the grille and dipped behind the sheetmetal to end at the base of the grille. It looked like it had to be wrong. Yet it wasn’t, based on the teaser image Hyundai Europe just released of the coming Santa Fe.

The dark rendering shows the whole front fascia bearing those T-shaped DRLs, which, as others have pointed out, you could interpret as Volvo’s “Thor’s Hammer” turned 90 degrees. The vertical member splits two projector lamps tucked into the grille itself. Above, two power domes stand guard on the hood. An aggressively edged lower intake juts from the sheetmetal and flows into meaty wheel arches. Hyundai calls the design “rugged yet luxurious,” but this is clearly more intense than anything we’ve seen on a Santa Fe up to now.

The automaker is holding back on all the details, though. A press release ladles adjectives and generalizations like refreshed crossover getting a “dignified and charismatic exterior design” and an interior revamp “providing premium sensibility and comfort.” The big news is that the Santa Fe moves to the N3 third-generation architecture that ushers new electrified powertrains into the lineup. For Europe, that will mean hybrid and plug-in hybrid offerings to accompany “significant improvements in performance, handling and safety.”

The current Santa Fe has only been on sale for about two years, making this refresh sooner than we would have expected and perhaps delivering a lot more than we’d expect. The hybrid implementation is surely a move to keep European emissions numbers in check, so we wouldn’t be surprised at a delay before the update makes it to our shores. Hyundai said the new Santa Fe goes on sale on The Continent in September, and it will be telling us more about the model in the coming weeks.