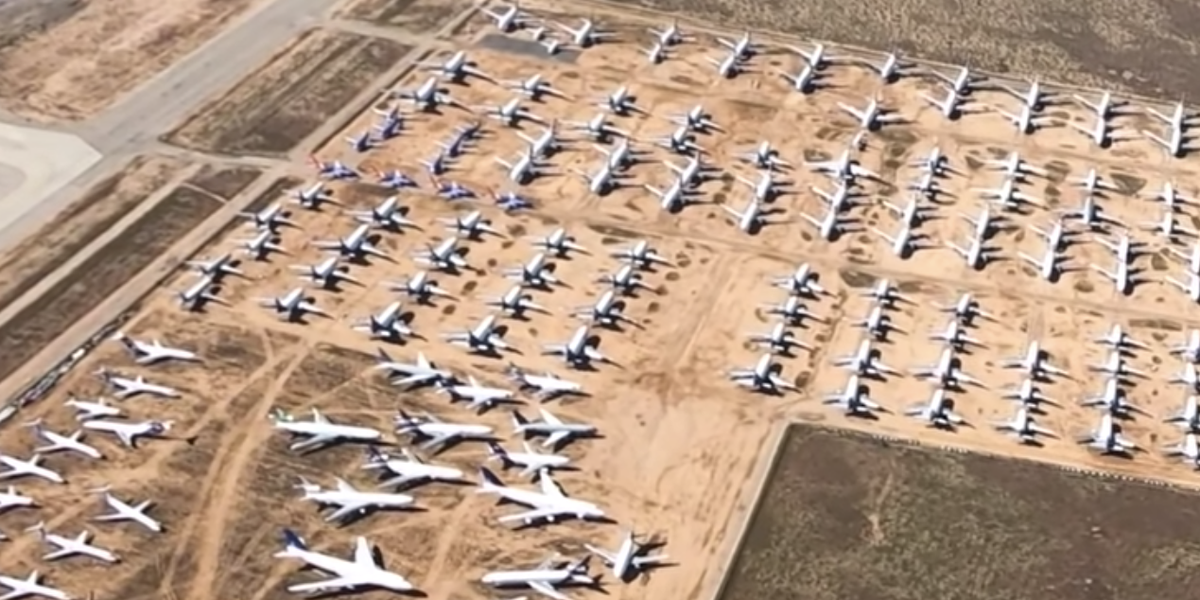 A talented pilot in a tiny plane is taking viewers on a tour of a COVID-19 (coronavirus)-induced airplane parking lot. YouTuber and pilot Bryan Keith took his small plane for a low altitude tour of Southern California Logistics Airport (SCLA) in Victorville, California. There, over 400 airliners are already in long-term parking due to the decrease in passenger flights during the pandemic.

“Going out for a short flight every couple of weeks has been a good way to clear my head and stay proficient,” Keith says. “And this flight was nothing short of epic.” As Keith approaches SCLA, he radios air traffic control and asks for permission to overfly at low altitude. “All right, here we go—never done this before!”

Keith explains that SCLA has the second longest public runway in the country, and was recently the site of a world record airplane wheelie. The airport is like a mini-mall of airplane services, with over a dozen “tenants” who fill needs like repairs and parts for aircraft of almost every size. And even during normal, pre-quarantine times, SCLA had storage services for fleet aircraft. On-site storage company ComAv has been roped in to help fill much more demand for storage.

“There’s something unnatural about seeing all these aircraft abandoned in the hot desert sun,” Keith says, as he buzzes over dozens of different airliners at a time, all in matching corporate liveries.

These planes are stored temporarily, but Victorville also has the longest-term parking: an airplane boneyard, which is what industry people call the airplane equivalent of an automotive junkyard. “Some jetliners are temporarily taken off flying status, and must be stored in a environment that is conducive to preservation. Others are kept for spare parts for flying aircraft,” the Airplane Boneyards site explains.

There are only about a dozen commercial airplane boneyards in the U.S., and Victorville has the space for both a boneyard and the current storage overflow for the same reason: it’s the site of a retired Air Force base. George Air Force Base closed in 1992, shortly after the fall of the Berlin Wall and the acknowledged end of the Cold War.

During that time, military funding rapidly constricted. Abandoned airfields and airports around the world have been repurposed into everything from shopping malls to the Top Gear test track. SCLA converted tons of space into airplane valet parking.

Keith thanks SCLA air traffic control as he departs the facility. They tell Keith that with over 400 planes on the ground already and another 50 to arrive soon, they don’t have an exact count offhand.

“You think they’re doing any deals on those airplanes? There’s a lot of ‘em,” someone says over his radio. “Like a buy one get one free thing? I’ll take two.”