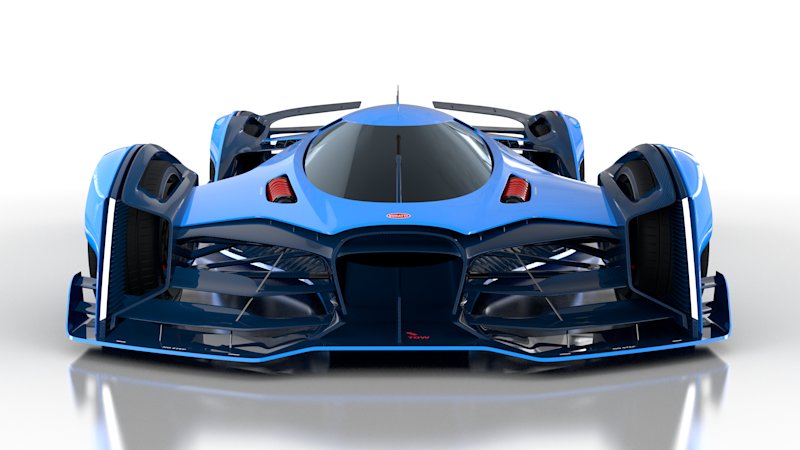 Bugatti hasn’t raced since the middle of the 1990s when Romano Artioli, its former owner, built an EB110 for the IMSA GT series and converted a second example to Le Mans specifications. The company is not actively planning a return to the track, don’t expect to see a Chiron compete in 2020, but it still embraces its vast motorsport heritage, so one of its youngest designers dedicated his thesis to exploring what form a comeback could take. The Vision Le Mans concept shown in renderings puts a forward-thinking spin on the Type 35.

Max Lask, a talented student who recently graduated from the Brunswick University of Art in Germany, explained his goal was not to create a retro-styled racer. That would have been too easy. Instead, he wanted to design a car that would be as advanced in 2050 as the Type 35 was when it made its debut at the 1924 Grand Prix of Lyon.

There’s a futuristic interpretation of Bugatti’s horseshoe-shaped grille up front, but that’s where the similarities between the Vision Le Mans concept and current members of the automaker’s range end. The rest of the car is an ode to the principles of aerodynamics. Every wing, vent, fin, and scoop serves a specific purpose.

Speculating what Le Mans-bound race cars will run on in 2050 required intense mental gymnastics. Motorsport is often at the forefront of innovation, so even 2020’s most advanced technologies will look comically obsolete in 30 years. To that end, Lask envisioned a powertrain that runs on ions — and not the Saturn kind. It sounds far-fetched, but spacecraft already use xenon ion thrusters, and MIT successfully tested an ion-powered plane, so the technology exists. In his thesis, Lask opined it could sooner or later trickle down to the automotive industry.

Bugatti stressed the Vision Le Mans concept is a one-off project Lask created to complete his design program, and it’s not a preview of an upcoming model. While the French company is rooted in racing — the aforementioned Type 35 earned over 2,000 victories between 1924 and 1930 — the Circuit de La Sarthe isn’t currently on the company’s radar.