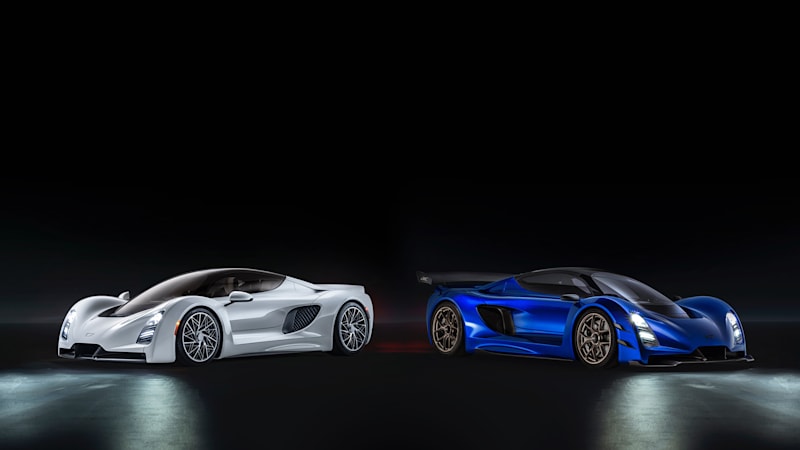 Assuming the 21C can bring those numbers to life, how does the coupe do it? There’s a 2.88-liter twin-turbo V8 with a flat-plane crank stowed amidships driving the rear wheels, good for 950 horsepower. (To get a sense of the march of progress, the 2.855-liter twin-turbo V8 in the 1984 Ferrari 288 GTO produced 350 hp.) Each front wheel gets a high-powered electric motor, serving up all-wheel drive and a combined output of 1,232 horsepower and 600 lb-ft of torque at 10,500 rpm, 500 rpm short of redline. The 21C in standard road guise without the big rear wing has a curb weight of 1,250 kilograms (2,756 pounds), and with a metric horsepower rating of 1,250 hp, we’re talking about a 1:1 power-to-weight ratio. The 21C Lightweight track-focused car with the big rear wing weighs just 1,218 kg (2,685 pounds). Shifting through a seven-speed automated manual transmission, the road car maxes out at 268 mph, the track car produces more than three times the road car’s downforce so its top speed comes in at 236 mph.

The e-motors get juice from a lithium-titanate battery, the same pack composition used by the Mitsubishi i-Miev and Honda Fit EV, an integrated starter-generator helping to deliver power where needed. Czinger says the entire powertrain was designed and is built in-house, and it’s flex-fuel — owners can fill up with Vulcanol, described as “a renewable methanol made from captured carbon dioxide,” assuming they can find it.

Czinger is only making 80 examples of the 21C, using its proprietary “vertical assembly,” 3D-printed build processes that combine carbon fiber, high-performance alloys, and other materials, topped off with book-matched carbon fiber bodywork. Road & Track has a good writeup on the production system. Company founder Kevin Czinger explained that the 3D-printed parts are expected to last the lifetime of the car, but if any need to be replaced, they can be dissolved into their original powder and reconstituted to serve a different purpose.

Each 21C comes with a reported price of $1.7 million before the obligatory options and fripperies. We look forward to checking this one out in Geneva, and we’ll take the one with the wing, please.