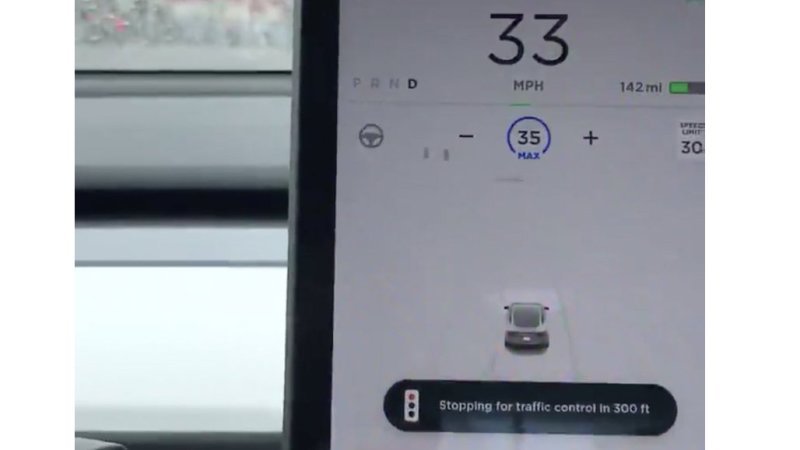 Recent video shot by Out of Spec Motoring in a Tesla Model 3 showed the sedan automatically stopping for traffic lights at intersections. The software enabling the electric compact to recognize stop lights and stop signs has been anticipated for at least a year, but the outlet didn’t supply any details about the short clip. A Tesla-focused hacker going by the Twitter handle greentheonly, who recently unearthed code about new battery and suspension options, posted what’s claimed to be an official Model 3 and Model Y manual that explains the technology called Stopping at Traffic Lights and Stop Signs. Tesla hasn’t commented on the veracity of the paperwork. As described in the text, the software emphasizes caution, and frankly, appears to be learning how to deal with infrastructure at intersections. This period of learning could be to supply real-world information to Tesla’s neural network.

Here’s the manual edited to be brighter and more contrast and split into 4 pictures for easier reading pic.twitter.com/MfoPw2R0xY

Activated when Autosteer and Traffic-Aware Cruise Control, which are part of Autopilot, are enabled, the feature uses the car’s front cameras and GPS information to note stop signs and stop lights. A note pops up on the screen informing the driver that the car will come to halt, a red line showing where the car will stop. Notably, though, the car stops for every traffic light even if the light is green. Should the driver wish to carry on, say in the case of a green light, the driver needs to press the gear lever or the throttle. If the software decides stopping is the right thing to do, the driver must keep his foot on the accelerator to override the stop command. When stopped at red light, once the light turns green, pressing the gear lever or throttle gets the car going again. In order to — hypothetically, of course — run a red light, it’s necessary to first press the brake pedal to cancel all driver aids and return full control to the driver. Otherwise, merely pressing the accelerator or gear lever won’t get the Tesla to move at a red light. As with all of the autonomous helpers in Tesla models, the automaker cautions repeatedly that ultimate responsibility is with the driver.

Because the manual doesn’t mention the necessity of Full Self-Driving, some Tesla watchers wonder if Stopping at Traffic Lights and Stop Signs will be available to owners whose cars don’t have the $7,000 FSD option. On the Tesla configurator, however, the feature is listed in the FSD section. Additional information and demos will probably come once the beta software rolls out to more of Tesla’s voluntary early access fleet.