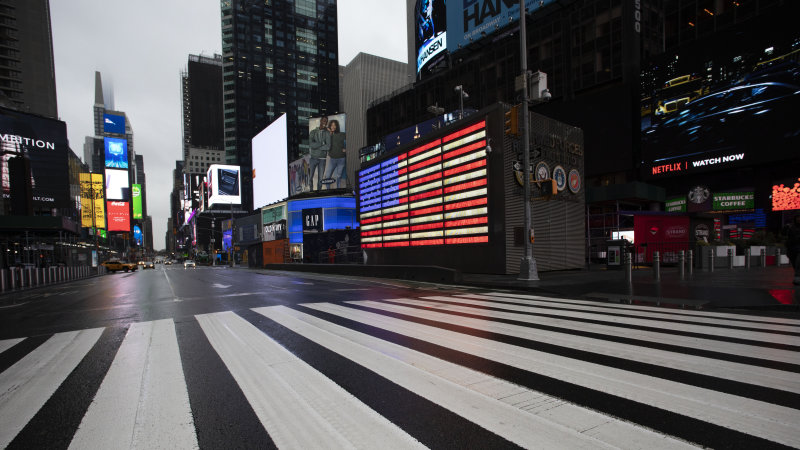 According to New York Gov. Andrew Cuomo, as of Sunday, March 22, nearly 2,000 New Yorkers have been hospitalized, and 114 have died. More than 15,000 have tested positive statewide. Some 9,000 of those are in New York City. In response, Cuomo announced a new state order Sunday at 8 p.m. requiring all nonessential employees to stay at home. Nonessential gatherings of individuals of any size or for any reason have also been canceled or postponed.

The impact on the usually bustling city were visible throughout New York City. Efforts to contain the spread of the coronavirus have completely altered the usual New Yorker way of life, effectively putting the “city that never sleeps” to sleep in the last week after it became one of the nation’s epicenters for the fast-spreading virus.

Take a look at the image gallery up above. You’ll see a New York City that you simply don’t recognize. A desolate Times Square still lit up with no one to see its billboards. The usually bustling Grand Central Terminal empty, except for a lone traveler. Only a few people snapping selfies on the Brooklyn Bridge, instead of the horde of commuters and tourists that usually venture across the iconic span.

The Charging Bull, a popular tourist attraction near the Stock Exchange normally surrounded by tourists, stood alone with no one in sight, with the occasional selfie-seeking person taking advantage of what may be a once-in-a-lifetime picture. Once-packed subway cars had only a few passengers, almost all wearing face masks.

And a row of Broadway theaters were still illuminated even though they are shuttered until mid-April, a sign that the show will go on.

It’s not yet clear when the city will reopen, but until it does, expect to see deserted scenes like the ones you see above.

The Associated Press contributed to this report.