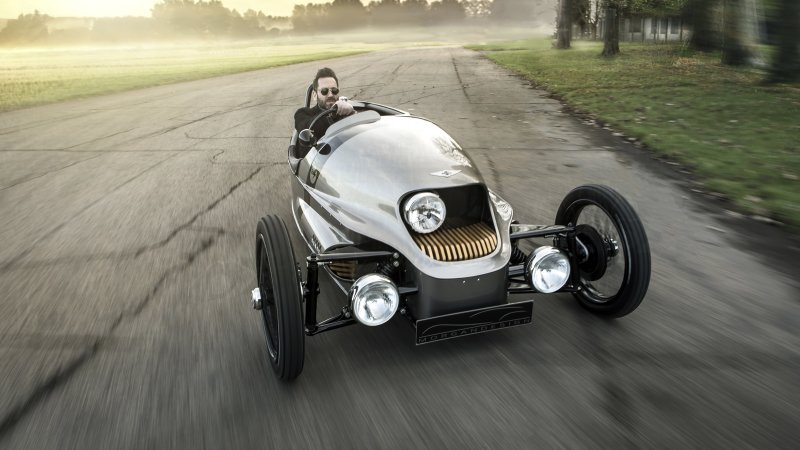 The electric EV3 that England-based Morgan unveiled at the 2016 Geneva auto show has been deep-sixed, but the company hasn’t given up on electrification. It’s now developing the technology in-house.

“We have two EV-trained technicians in our development team, which, without saying a great deal tells you a lot about our commitment to electric technology,” Jonathan Wells, Morgan’s lead designer, told Autoblog.

The company planned to bring its battery-powered three-wheeler (pictured) to production but it put the model on an indefinite hiatus in 2018 due to issues encountered with its powertrain supplier. The setup consisted of a 21-kilowatt-hour lithium-ion battery pack that zapped a 47-horsepower electric motor into motion. The EV3 featured fast-charging technology, and it offered up to 120 miles of driving range, figures that would have made it a fun, zero-emissions runabout. It also illustrated how Morgan could move its design language forward.

Canceling a project that’s well on its way to production is never ideal — it’s a big waste of time and money — but Wells explained the entire company learned a lot from it. The lessons drawn from the EV3 included how to manufacture an electric car, and how to ensure its dealer network is ready to service one.

“We learned a great deal from the EV3 program, and that’s really fueling future project generations and future projects that are in play at the moment,” Wells hinted without providing more specific details.

He nonetheless hinted Morgan developed a new, aluminum-intensive platform named CX in part to accommodate electrified technology. It’s the chassis the Plus Six and the recently-unveiled Plus Four are both built on.

“Our previous platform would have required quite a lot of work to satisfy impending legislation, the drive towards alternative propulsion types, and safety systems that are coming online. We recognized we needed a new platform,” he summed up. In other words, Morgan’s cars aren’t nearly as old-school as they might look.

“We’re keeping an eye on the future, and we’ll be ready for it when it arrives,” Wells affirmed.