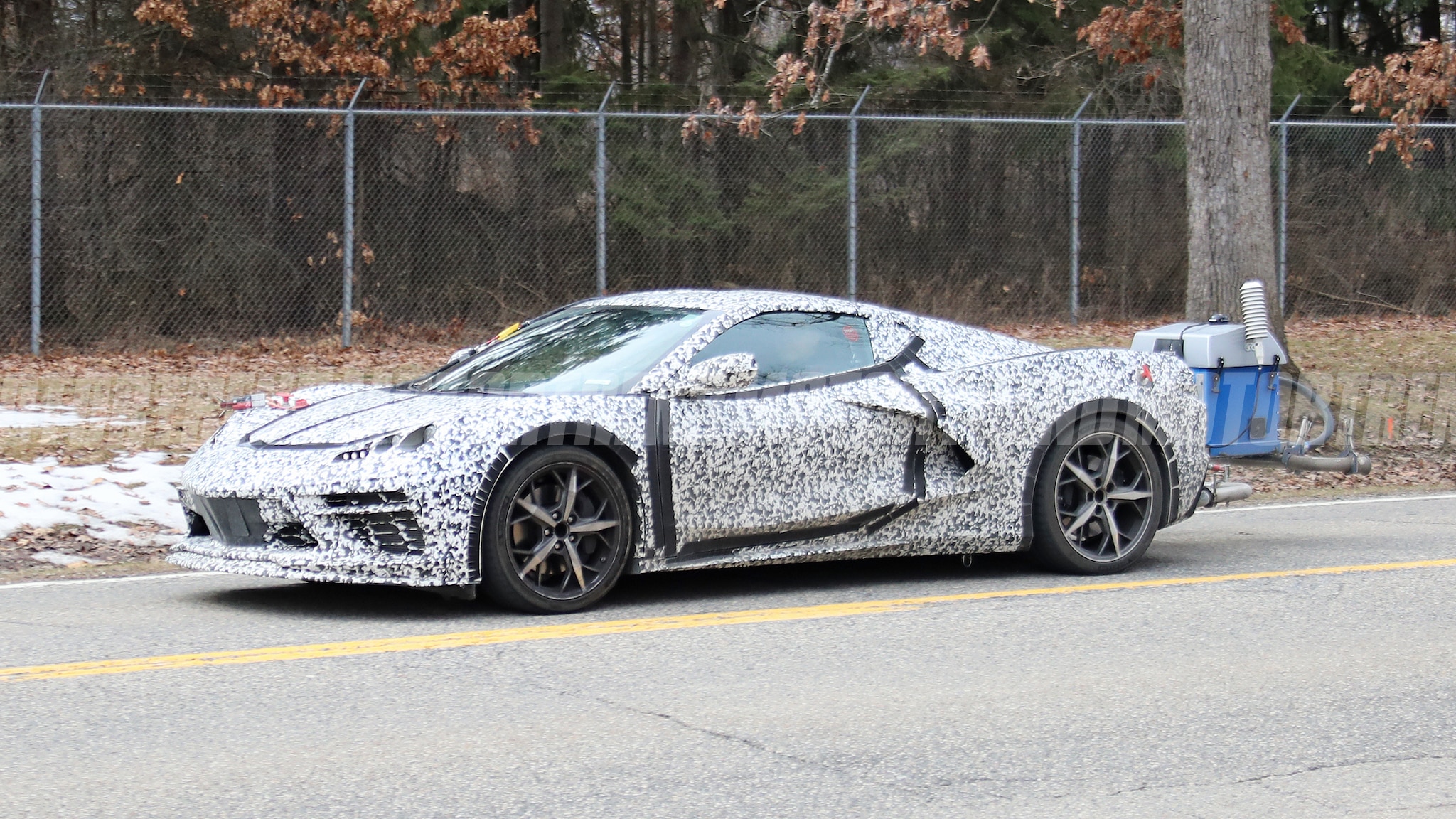 What makes us think this (probably) isn’t the ZR1 super-hybrid, at least in its final form? In part, because there are none of the aerodynamic add-ons we expect to see from a 900-hp supercar, or any Corvette ZR1, for that matter: The car lacks a huge splitter, there is no massive diffuser, and nary a giant wing in sight. In fact, the bodywork all looks to be fairly standard C8 Corvette fare. We’re not saying the Stingray looks boring—but there’s obviously space between it and the C8.R race car to get a little wilder.

2020 MotorTrend Car of the Year: the Chevrolet Corvette

Behind the Scenes: Deciding MotorTrend’s 2020 Truck of the Year

MotorTrend’s 2020 “Of the Year” Awards: Celebrating 70 Years of Journalism and Cars

The Breakdown: Corvette C7 and Two C8s at the Track

From the Press Room: 2021 Chevrolet Tahoe

MotorTrend Exclusive: What We Know About the 2020 C8 Corvette With Jacked Wheels

Moreover, this probably isn’t the super-hybrid Corvette because, if you look closely at the hub centers, there it doesn’t appear to be any drive axle nut on the front end like there is at the rear—meaning it’s most likely not all-wheel-drive. As we reported last November, citing a highly placed source within GM, that the Corvette ZR1 hybrid would be the brand’s first all-wheel-drive Corvette thanks to the addition of front-axle electric motors stuffed into the “frunk” space, along with a twin-turbocharged V-8 for a total system output of 900 horsepower.

Indications that this might be an early mule for the 2023 Corvette ZR1’s hybrid powertrain include the array of cabling and the kill switch mounted to the passenger-side frunk area. Yes, the car’s 12-volt battery rides upfront, so it could just be a kill switch for that, but none of the conventional C8 Corvettes spied in testing before the reveal last year had such a setup. Possibly, it’s there to kill power to the hybrid system, which might house its control electronics in the frunk/firewall area as well. There also is what appears to be an electrical cut out of some kind mounted to the rear driver’s side fender, which might be the location for a not-yet-fabricated charging port.

That crazy box of equipment hanging off the back of the car looks a lot like the RealMPG equipment we use for our real-world emissions and gas mileage testing. It would make sense for Chevy to test the emissions of their hybrid system while developing the system itself, though that is not the only possible explanation.

Other questions without firm answers? Where the battery might go in a hybrid Corvette. If you look at the body-in-white photos from the car’s unveiling (like that above), there is a huge, empty rectangular-section tunnel running through the middle of the car. It’s the perfect place, both architecturally and dynamically, to put a battery. Chevrolet‘s Volt plug-in hybrid, for example, located its battery in a similar T-shape down the center of the vehicle, and its location so low in the car helped that hatchback handle with surprising athleticism.

Next to the hybrid and ZR1, the eighth-generation Corvette still has plenty in store. A Z06 variant is almost guaranteed, and we expect that to be a raucous supercar in its own right, with as much as 800 horsepower and 700 lb-ft of torque on tap from a flat-plane-crank, DOHC V-8 in addition to a full aerodynamic treatment, wider wheels and tires, and upgraded, track-tuned suspension.