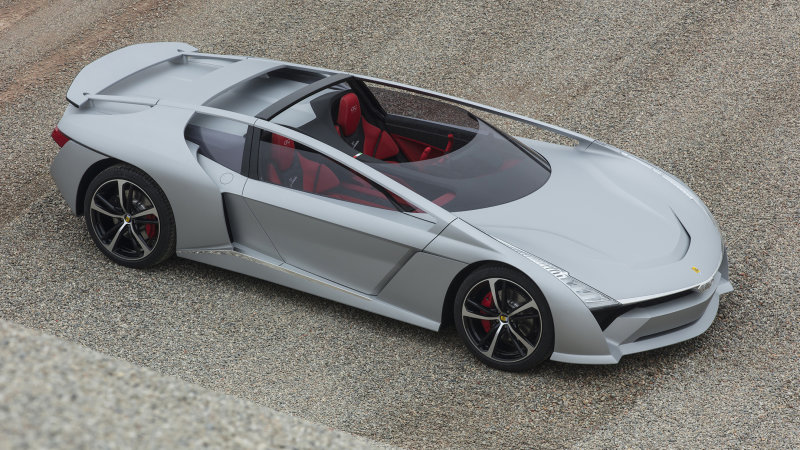 Fabrizio and Giorgetto Giugiaro, the father-son duo who paired up to create automotive company GFG Style, have been swept up in the wave of the times and gone all-in on electric. In the past four months, GFG Style unveiled three new concept vehicles, all of which use batteries and electric motors for propulsion. The Vision 2030 and Vision 2030 Desert Raid offer new perspectives on off-road-ready supercars, and the Bandini Dora evokes Italian history in a stylish barchetta.

GFG Style started in 2015 and has been hard at work envisioning the future of the automobile. Since opening its doors, the design and consultation firm has crafted seven concept cars, including the Kangaroo, an electric all-terrain supercar that was one of the coolest and most interesting vehicles at the 2019 Geneva Motor Show. It seems Fabrizio and Giorgetto couldn’t get the core conceptual nature of the Kangaroo out of their minds, as they debuted another all-terrain EV called the Vision 2030 in November 2019 at the Riyadh Motor Show in Saudi Arabia.

Pegged as a zero-emission all-wheel-drive hypercar designed for Saudi Arabian roads, the Vision 2030 is named after Saudi Vision 2030, a plan to help the country diversify its core businesses and move away from an independence on oil. “Saudi Arabia asked us to design a model that would perfectly adapt to their region, made up of completely new and decidedly wide roads, but also of deserts with dunes and rough terrains,” Fabrizio said in a press release. Fabrizio continued that the point of the car was a design study in wheels and suspension, which largely dictated the shape of the carbon fiber and aluminum car.

To accommodate the multiple types of terrain, the car’s suspension automatically adjusts based on driving conditions. The Vision 2030 also offers three driving modes, Race, Road and Off-Road, which change the ground clearance between 5.5 to 8.7 inches. Inside, six different digital screens ensure the car is properly connected and the driver is properly informed.

The Desert Raid is one of two concepts that were originally intended to debut at the 2020 Geneva Motor Show before it was canceled due to precautions surrounding the coronavirus outbreak. As indicated by the name, the Desert Raid is an alternate variation of the Vision 2030. GFG Style says the Desert Raid underlines “the true capacity of this project: not to become a hypercar but a hyperSUV.”

The Desert Raid has the same battery, power, and general performance specifications as the Vision 2030, as they share the same electric powertrain setup. The bodywork, save for the rear, is also the same, but small tweaks make this vehicle specialized for off-roading. Whereas the Vision 2030 had multiple driving modes, this version only has one setup skewed toward handling rough terrain. Thus, it remains at 8.7 inches of ground clearance at all times. It also has a wider track, smaller wheels, new carbon fiber mudguards, and a visible spare tire integrated into the top rear portion of the car.

The second prototype meant for Geneva is the Bandini Dora. Like the other prototypes, it has a space frame aluminum chassis, carbon fiber bodywork, and a 90-kWh battery pack that provides a claimed range of more than 280 miles per full charge. Compared to the Vision 2030 cars, however, the Dora is slightly more amped up. Two electric motors, one on each axle, account for 536 horsepower and 502 lb-ft of torque. Equipped with all-wheel drive, the Dora has a claimed 0-62-mph time of 3.3 seconds.

Riding on 21-inch wheels, the Dora is the work of a collaboration with Bandini, an Italian manufacturer founded by Ilario Bandini that originally ran from 1946 until 1992. The company was resurrected as Bandini Automobili s.r.l, thanks to Ilario’s great grandson Michele, and this car is meant to be an ode to Bandini barchetta race cars of decades past. GFG Style’s Geneva stand was planned to include a Bandini 750 Sport Internazionale from the Mille Miglia Museum.

The Bandini Dora is an open-top two-seater, but its clever design is unlike anything of the past or present. Look closely, and the lines reveal that the windshield and encapsulated cockpit are entirely separate from the car’s roof arches. This was the result of blending old design with new safety standards.

“Today, it is difficult to conceive a Barchetta without considering the evolution there has been in the car concerning safety,” Giugiaro was quoted in the press release. “Inspired by the Halo of Formula One, we thought about creating a car that had a clean windshield as it used to be used with no reinforcements, thus being as linear and light as possible. To solve this need, I thought of an out-and-out superstructure that would integrate into the style with an accentuated structural and protective function for both the driver and passenger.”

To properly appreciate the affect this design has on the car, it must be looked at from all angles. The prominent lines extends from the front bumper, curve over the front wheels, and swoop inward toward the rear to become part of the active aerodynamics. Because they don’t connect with the glass at any point, they creates all types of negative spaces, intersections, and design features that you just don’t see on normal cars. From the front, it almost looks as if one car has overtaken another car that lives beneath it.

For now, all three vehicles are just prototypes. The video below shows a press conference in which GFG Style announced the new designs.